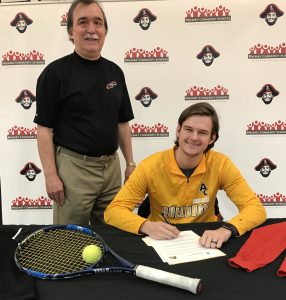 This past Thursday, Pinckney High School Senior, Adam Caplin,  signed his letter of intent to play college tennis at Adrian College while majoring in Sports Management.    Over the past four years, Adam improved his tennis game through hard off-season work, participating in multiple off-season programs Coach Diaz said, “It has been a joy to see his hard work pay off with the many accolades he has received his senior season.”  Most notable he was selected as the  Livingston County Tennis Player of the Year by the Press & Argus newspaper. 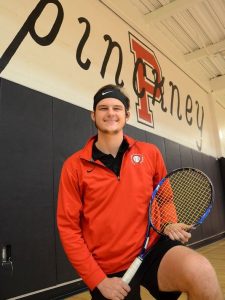 Adam is also a 3 year member of the Varsity hockey team.  His coach, Ted Kroll, said “He is a great Senior leader and one they look to for offensive boosts.”

1. What Is your greatest sports memory?

I would say going to states with the team. It was a big deal for me and the team to because it was our first time going as a team. It was so much fun and there was so much good tennis there. 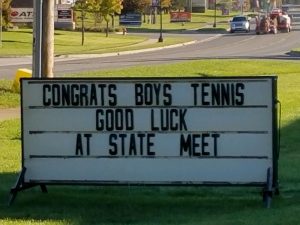 2. If there was any arena or event you would want to go to where would it be?

Probably, The US Open in New York.

CC: Anyone in particular you want to watch?

Roger Federer.  He is my favorite tennis player.

3. What will be the first thing that you will do will do when you get to Adrian College?

Try to meet some new friends. Try to get closer with my teammates

4. What is the most important skill in tennis?

Just make sure you keep the ball over the net. Keep it low and in and don’t get crazy with your shots.

5. What was the first thing you did when you got to states in Tennis?

Just bonding with teammates a lot and getting closer with them. Also, focusing on the games we had the next day. 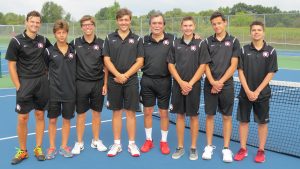 6. Who was most famous person you ever met?

I’m not sure. I’ve never really met anyone famous.

7. If you weren’t playing tennis what sport would you be playing?

I would be playing hockey because I also play hockey for PHS as well.

8. What is your favorite Pinckney High School memory?

Everything was good I think. The way they ran the Football and Basketball games. I could not really choose. I will always remember my Coach Ben because he was the one that got me into tennis and I couldn’t thank him enough for that.

9. What are you going to do when you get home?

Probably look at the pictures I just took.

10.I don’t know who I am interviewing next, but do have a question for the next person I interview?

What makes your sport so much fun and worth playing?

Congratulations to Adam on his great accomplishments!