Pinckney Senior, Connor Chynoweth, officially signed his letter of intent to play basketball for the Dominican University Stars next year. 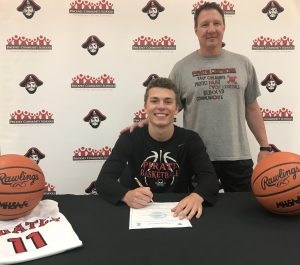 Coach Reason said, “Connor is a student of the game.  He works hard and constantly works to improve in the off-season.  He is the first one at practice and the last one to leave. Connor has a unique ability to make everyone else around him better.”

The respect is mutual from Connor as he said, “Coach Reason pushed me.  He taught me how to be coachable. How to be a man.”

Connor is planning to major in Sports Managment in the fall.  He will be missed by his teammates on and off the court although Pirate Nation is excited to see where his hard work and dedication will take him!