Pirates Official Sponsor
The Pirate girls varsity volleyball team pulled out a victory over the AA Pioneers last night.  It was a grueling match  that went 5 sets and 2.5 hours!
Sets were:
Pinc 22- Pion 25
Pinc 25- Pion 14
Pinc 12- Pion 25
Pinc 25- Pinn 22
Pinc 15- Pion 9
Great performances by defensive specialist, Sophia Oakes with 42 defensive plays and only 6 errors along with her 11 attacks.
Attackers Kate Kerns had 35 attacks – 12 kills, Kylie Ray with 24 attacks and 6 kills, Nicole Darin with 20 attacks and 7 kills, and Madeline Curtis had 14 attacks and 3 kills.
The kills were made possible by setters Taylor Kennard with 90 sets to her 25 assists and Huntley Doyle had 20 sets with 4 assists.  Madeline Curtis and Abby Mondro’s blocks were awesome to witness.
All of the 13 Varsity players were utilized at some point in the match.  It was a great start to the season and our student cheering section was greatly appreciated. 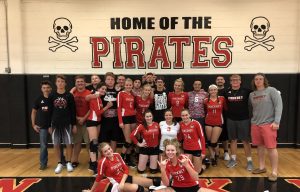